Can a mildly depressed person get a grip over their lives, by themselves?
This is a blog by Anney Bird, about her overdue decision to take action in overcoming her psychological problems.

I write mostly about ... 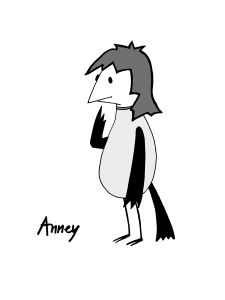 This is Anney. She’s me and not me.
She is my depressed self, the excerpt of a person with all of my psychological issues, and mostly no coping mechanisms.

She is also more emotional than I am. I tend to have a ‘nothing-can-shake-me’ attitude (while inside of me, chaos reigns). Probably this attitude comes through more like being aloof, though.

By an alter ego, I can detach myself from my problems and view them more objectively. By reducing the whole person into a more sad representation I leave some place for change, for growth and learning.

In the therapy sessions, what is written in the text is more ‘me’ than what is represented in the accompanying comics. Comics and drawings are more raw, more abstract. They depict problems in a simplistic, sometimes humorous, way, while texts are more realistic and deal with actual issues, as serious as they get. But mostly, I equate Anney with me.

Anney is the default. Whenever I use first person narrative, she’s the speaker. 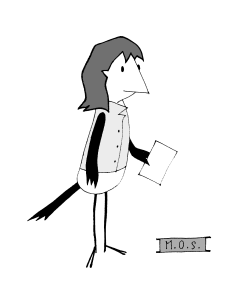 This is Mos, Anney’s alter-ego.
She is a psychotherapist.
She is composed, objective, firm, and helpful. She’s definitely not emotional. Like she doesn’t have a life out of her useful existence.
Mos acts as a robot. All ramblings and emotional outpours in the therapy sessions are done by Anney. Mos acts as an objective, neutral, response to keep the conversation on track. To give words direction, otherwise, ideas (and words) would pour out in every way and dissipate without purpose.

In TS (Therapy sessions) posts, Anney’s lines (a patient’s) are in plain, non-italicized text. Mos’ lines (a therapist’s) are italicised. 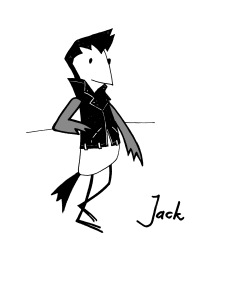 ck, one of my inner voices. I’ve known him for a long time.

Now you’ve probably raised a brow. I’m not crazy, I just know the inside of my head. (As far as I know, I’m also not a multiple personality.)

I have two additional voices, other than the default thoughts. When younger, I oftentimes “spoke” to them. It was the way to sort out my thoughts. I don’t remember which book I had read before I took notice of those two other, distinct, voices. The book described we all have those voices, which some refer to as good and bad voices, or the superego and id.
You know those cartoons with a little angel and a little devil whispering into a hero’s ears?

Jack turned out to be a rebel, much like some James Dean character. He is a bit sarcastic, is bound to interrupt a conversation, and is an advocate for honesty and bluntness. He alerts me if I veer from honesty to embellishment. 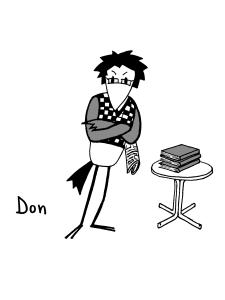 And then there is Don. A calm superego type of a character, who is an advocate for art, hard work and seriousness. Not for spontaneity. He doesn’t like lying but does not oppose to omitting information. Diplomatic. He’s more judicious but can strike if under pressure. He’s a pain-in-the-ass teacher-like snob. (This may have come out of Jack’s mouth when I was searching for a good description.)

Both Jack and Don have been hibernating for the past few years. It seems I haven’t done any conscious thinking about myself (or if you prefer meditation, mindfulness or any other self-awareness practice) for them to be of need.

Hey guys, wouldn’t you say something so I don’t sound crazy?

— [Don, who has better things to do, probably reading serious works in a library far far away] — Sometimes I wish I could punish you, other than just word-direct you. You are making a fool of yourself already, and pulling me in, even if I object to your project. —

If there were some voicings these past, empty, years, they were oftener from Jack. Or I may have listened to Jack more than Don. Sulk away, Don. I’ll deal with the consequences later.

You see, quite fun talking to my selfs … Mos is quiet, though. She’s a construct that is not inherent to my mind. Anney, Don and Jack all have their distinct feelings and express them. I’m quite looking forward to my sessions, now that I’m sure of Jack and Don’s help. I wish they are interesting for you too. 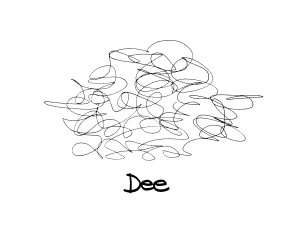 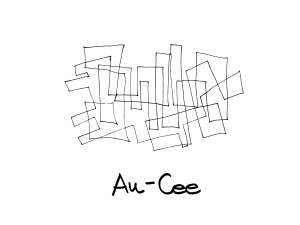 These are Dee and Aucee, my pets. Dee stands for depression, while Aucee is a pet name for OCD. My mind nourishes them, and they are some of the most resilient species of pets on Earth. They’ll grow old, wane and perhaps die, as all the pets do. I hope I live longer. P.S. This is Resistance. It calls itself Re-Zeé. Out of my resistance to Resistance, I call it Reseé.
It’s wild. Does not obey the rules. It comes and go, much to the chagrin of every other person listed here. Because you see, we all follow some rules, but for Reseé. It’s stealthy, most times invisible, inaudible, but it works its ways efficiently.
Reseé is the real opponent in my struggles to change.

*A note on the players’ lines throughout the blog:
My lines, as a default boss’ of my mind, are in plain, non-italicized text. Emphasised words or phrases are italicised. Every other ‘person’s’ lines are italicised (apart from Anney/me and Mos, everyone else has a [name tag] before the words).
When someone else gains control of my mind and starts talking non-italicised, please call for help.

Thank you for sharing: